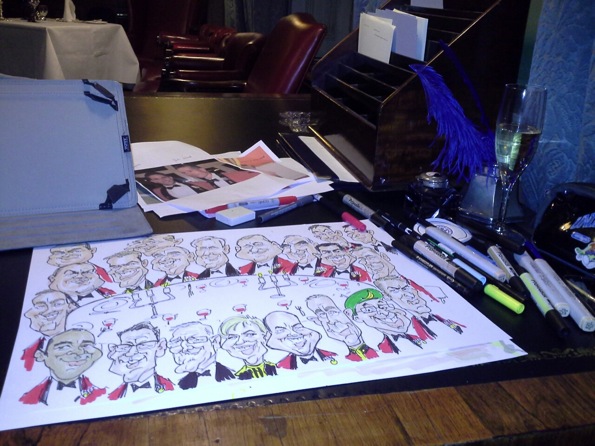 Most live caricature work I get is drawing individual caricatures – but this was to produce an A3 colour group caricature. I recently had an enquiry about drawing caricatures at the prestigious Carlton Club in St. James’ Street in London. The idea was that a group of military chaps who had served in Afghanistan and Iraq were having a get together to remember absent friends, and they would like a caricature of each of them to take home a memento – initially 13. However, they then decided to make it a group caricature so that they could all be together and it would then be copied for each person to have one.

Some of the people who were part of this group wouldn’t be able to make it to the meeting so photos were sent prior to the evening. This gave me a chance to at least rough out the scenario and pencil in the initial caricatures. When I arrived I was welcomed by the organiser and offered a glass of champagne – I  politely accepted and started taking photos of the guests on my tablet – much easier working with both photo reference in front of you as well as the individuals themselves. The initial 13 had crept up to 17 and when I arrived I was told that there were actually 23 in the group! I had to revise my plan and make room for the extras! They had set a table aside for me to work at and